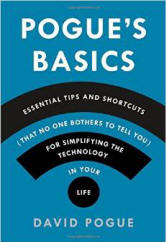 This book could end up being the tech bible you keep nearby to answer those tech questions that come up and the frustrations you encounter when you are using your devices. It is called Pogue’s Basics and is written by David Pogue, who was a tech columinist for the New York Times for 13 years and has done four TED talks, a host of shows on PBS and is a monthly columnist for Scientific American. His reason for writing the book? “There’s no driver’s ed class for tech,” he writes. “There’s no government pamphlet that covers the essentials. Somehow, you’re just supposed to know how to use your camera, phone, e-book reader, GPS, printer, Web browser, e-mail system, and social network.” Lucky for us, Pogue offers to help us out.

The book is divided into four parts: gadgets, the computer, the internet, and social networks. The gadgets section covers phones, tablets, cameras, etc., and is very informative. This section and the section on computers probably contain the most new information. While the last two on the internet and social networks are helpful, many of us are already using facebook, twitter and instagram and are familiar with using hashtags. If you are not up to speed on using these social network sites and other apps, such as Pandora and Spotify for free music and the Uber app to call a taxi, these last two chapters will provide you with a good education.

I discovered many new things in this book about using smartphones, especially tips on using the keyboard. For instance, did you know that you can access foreign language accents or diacritical marks on the vowel keys, such as the German umlaut (ü) by holding your finger down on a letter key to see all of its accented variations and then sliding to the one you choose. (This also works for the iPad and Mac, which I know because I typed this with my Mac.) Also, if you hold down the $ sign, you can access other currency symbols.

Here is a good tip when submitting a question about your computer or you need any other kind of tech support. Use Google! Google your query, such as “page numbers won’t print in Microsoft Word,’ and add “solved” to your question. In doing so, Google will show you only the discussions where the question was solved. I love this, because I have been frustrated when googling a question, only to find a thread of comments without a solution.

Pogue gives great advice for both Apple and Microsoft users. He lists apps that can simpify your life and ways to use all of your devices that you may not have known. It’s a great little book with a lot of tips. Unless you are living on a technology free island, you are bound to find something useful in it for you!