Things a Little Bird Told Me by Biz Stone

Things a Little Bird Told Me by Biz Stone

You may have read our book review on Hatching Twitter by Nick Bolton, a fascinating take on the founding of Twitter and the men behind its creation. Hatching Twitter was, at points, a dark read on the infighting and personalities of a little start-up company that quickly became a multi-billion dollar business.  Things a Little Bird Told Me  is Biz Stone’s account of the founding of Twitter and his personal story of how he got to be one of its founders and an integral part of the company. Stone’s version is the feel good version, but it is also filled with interesting stories and positive advice on pursuing your dreams and starting your own business. 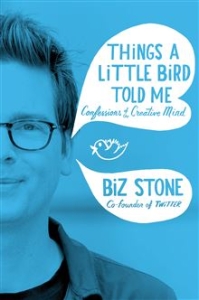 In a Washington Post review of the book, Tim Wu likened Biz Stone to Ringo of the Beatles, and it’s an accurate comparison. Of the four founders, Noah Glass left in the early stages and Evan Williams and Jack Dorsey each served as CEO for a time, and both were ousted at different points. “When Jack told me that he needed me to keep up the company’s spirits, I realized my positivity, though hard to measure, was important….I was responsible for the company culture.” And, so begins the story of Stone’s time at Twitter and his philosophy of business.

Stone tells many stories throughout the book of how his experiences shaped him and convinced him to remain true to himself, even along his career path. He recounts stories of how he convinced his high school teacher to enact a “no homework policy” and offers a funny account of meeting Mark Zuckerberg. For most of his stories, he offers up a message to the budding entrepreneur. In describing the sci-fi movie Gattica, Stone’s summation is “in order to succeed spectacularly, you must be ready to fail spectacularly.”

For many years, Biz Stone struggled financially. When financial success came, he and his wife enjoyed giving a lot away. When he was asked to go on the Colbert Report, he received a $25 gift card to DonorsChoose.org, an organization that donates to public schools. As Stone’s wealth grew, so did his involvement and donations to this organization and others. There are other inspirational tales in the book, that he seems to relish telling.

This is a book that not everyone will like. When Stone muses on his positive philosophy, some might find it annoying, but it does feel that he was always this upbeat person. I would recommend reading it along with Hatching Twitter, if you haven’t read it already. Combined, you get a great view of the founding of a tech start-up. Both make for great summer reads, too. Enjoy!