Tablets and Laptops: Their Future in Business

Tablets and Laptops: Their Future in Business 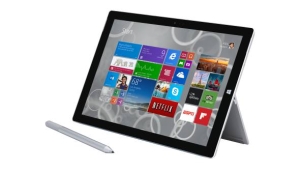 There is an on-going argument in the blogosphere and other media on the future of PCs and laptops versus tablets and smartphones in business. Trending thoughts seem to put tablets and smartphones in the forefront for the future. Back in December of last year, computerworld.com noted a recent study by Gartner Market Research that made the prediction that by 2018 half of all users will turn to their tablets or smartphones before laptops or PCs. The article went on to guess that this prediction might be too strong, since complex tasks in the workplace might still require a larger device.

Bigger displays and processing power of PCs and laptops are still helpful in business tasks such as creating content. Many executives, however, tend to use tablets with a wireless keyboard while keeping a powerful desktop at work that can be readily accessed. It is a fact that PC and laptop shipments have been on the decline. Still, in an article from January of this year, What IT Pros are Buying from zdnet.com, 82% of IT pros, who were surveyed, claimed they will replace their existing desktops or PCs with another.

One choice that is gaining in popularity in the workplace is the Surface Pro 3. It feels like a PC, not a tablet, and it connects to a Bluetooth keyboard. The stand and the keyboard make it look like a laptop. It is also more powerful than the iPad, and while the Surface Pro 3 is doing well, iPad sales have fallen this year. This could be partially due to the popularity of the bigger smartphone screens, including the larger iPhone 6. In addition, those who would buy an iPad most likely already have one and were more ready to purchase the newest iPhone. At the same time, laptops (including Apple laptops) are becoming much lighter and thinner, putting them in competition with tablets.

The Surface Pro 3 falls in the category of hybrid laptops, laptops that can serve as a laptop or tablet. They either have a detachable design (a touchscreen that can become a tablet) or a convertible design, where the notebook’s hinge rotates 360 degrees for the same purpose. They range in price from under $700 to $2000. Other than the Surface Pro 3, another good choice is the HP Spectre x360, which is heavy for a tablet, but powerful. The Lenovo ThinkPad Yoga 12 is a good option for both work and gaming.

With the launching of Windows 10, expect to see an even bigger selection of these devices to hit the market in the near future. And, in this summer season of travel, these hybrid laptops are excellent for travel.

Remember to keep your devices secure when traveling. You can see our recent blog post, Summer Travel Tech Tips, for more on travel and tech security.